So I decided earlier this winter that I finally needed a real, solid workbench to take my hand-tool skills to the level. Trying to saw, plane and mortise without an adequate way to hold the wood is not only inefficient, it’s dangerous and is one of the reasons I’ve burned through two boxes of 100 count band-aids in the last 6 months. So I went out and bought Chris Schwartz’s workbench book and devoured it as well as all the free online content I could find.

I decided a modified Roubo-style bench woudl suit my needs and bought a Veritas twin-screw vise, a shoulder vise screw mechanism, and a Taiwanese-copy of the Emmeret patternmakers vise. After pricing suitable locally available woods I decided upon ash for the benchtop (Maple is $$$!) and decided also to use a large piece of purple heart for accents. I had a bunch of mahogany sitting around for several years and decided to use it for the base.

The problem with building a workbench is that every part is huge and heavy. Given my cramped basement space, I underestimated the difficulty of maneuverng all these large pieces. Thus, it is several months into the project and I still have not finished assembling the beast and all projects (except for small items like pens and a toolbox) are on hold until I finish up and make some spece. My space issue has been further complicated by the purchase of a new PM 2000 Powermatic tablesaw (5hp!) and the fact that my old tablesaw has not yet sold on Craigslist.

All this being said, here are a few photos of the workbench in progress. The shop is quite a bit more messy that usual due to the lack of space. 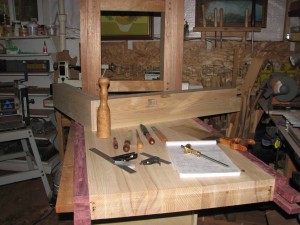 Workbench in progress - top is upside down. One set of legs is visible and has yet to be attached. In the foreground are a bunch of the tools used to create the tenons and mortises, including the giant dovetaile on the shoulder vise arm.

Chopping the giant mortises and tenons on this thing has been a real challenge. My new set of Pfiel chisels were found to be way to wimpy for the task (purpleheart is hard!) and I brought them back to woodcraft and ordered a new set of Lie Nielsens. Can’t wait for this bench to be done as I’ve a bunch of hand-tool projects lined up next!

This entry was posted in workshop. Bookmark the permalink.