So I got this commission about 2 months ago. They requested a side table that would have storage space for shoes at their backdoor and would also serve as a seat on which they could reside while donning their footwear. Since I’m still pretty new at building anything other than for myself or my family, I was excited about the project and expected to learn a ton about how to interact with clients. I did. But I lost my shorts on this. I bid WAY WAY too low. I’ve got 40 hours into this thing already and at least another 20 to go. Granted, It’s shaping up top be a pretty nice piece – nothing fancy, but with curves in all the right places. I’m not all that unhappy about building it for next to nothing, as I did learn a ton.

Originally I’d decided I was going to build the piece as a bent lamination. But after some thought and an assessment of my skills and tools (I’d need a drum sander to dimension the laminates), I decided on bricklaying the piece. The clients wanted cherry, so I scouted the lumberyards for a suitable piece. After an extensive search, I finally found a wide 8/4 board with few knots that. I used a bit of Oregon black walnut I’d had kicking around for the rest.

Bricklaying proved to be a challenge in itself. 77 pieces to cut at exact angles and glue end-to end; a lot of work. In retrospect, I should have laminated the piece – a view reinforced by the amount of work it took to fair the curves such that the piece was smooth and perpendicular to its edges. Whew!

I’ll add more photos as I progress, but here is what I’ve got thus far…oh, and, yes, my shop is in need of a good clean-up. After I’m done making dust!

Glueing up the individual bents

Fairing with a rasp...Luckily I learned how to fair a curve while building boats! 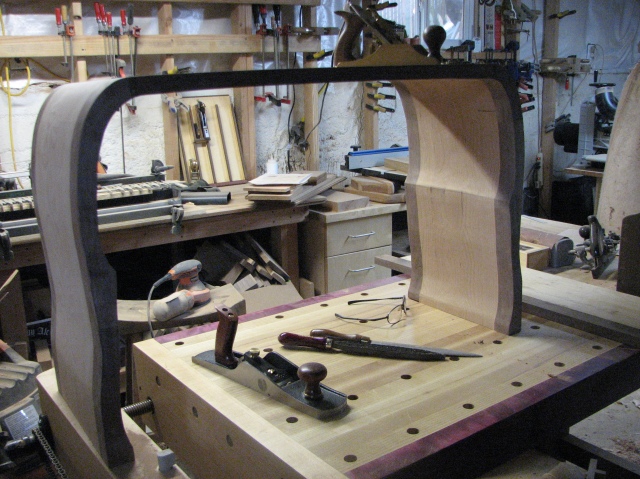 This entry was posted in bench, curved. Bookmark the permalink.